Robot 2. Through this minute scalping you will get impressive results.

By subscribing to the license of less than 30.00 per month you have access to all the robots developed by our company and to all the updates of each robot.

Once you buy your robot you receive a coupon to get the other strategies from Burritech for 1€.

The advantages of our trading robot:

– No psychological bias in your trading

– It is adaptable to your risk taking.

– It is scalable according to your starting capital.

– And above all, you are free with your time!

With our scalping minute trading robot, you will make your investment profitable.

The major problems of trading are:

– The time available to be behind the screen

– The psychological aspect, when you win or lose a trading position.

– The knowledge of the market.

The CAC40 does not react the same way as the Nasdaq or a foreign exchange market, etc.

Today’s technology allows us to bring together many conditions that a human being would not be able to manage simultaneously. All we need to do is to enter the right criteria and adapt them to the market over time.

So simple that it seems unreal. And yet, you just have to know how to play with the right rules of the game.

As usual, when you know, it’s easy!

Let’s move on to the features of the trading robot:

The robot strategy will only open positions between 9am and 5pm

It buys or sells when the buy and sell thresholds defined at the beginning of the day are exceeded.

Adjust the risk yourself according to your profile.

Let’s move on to the charts and analysis:

Monthly return of the trading system

Runup and Drawdown of the strategy 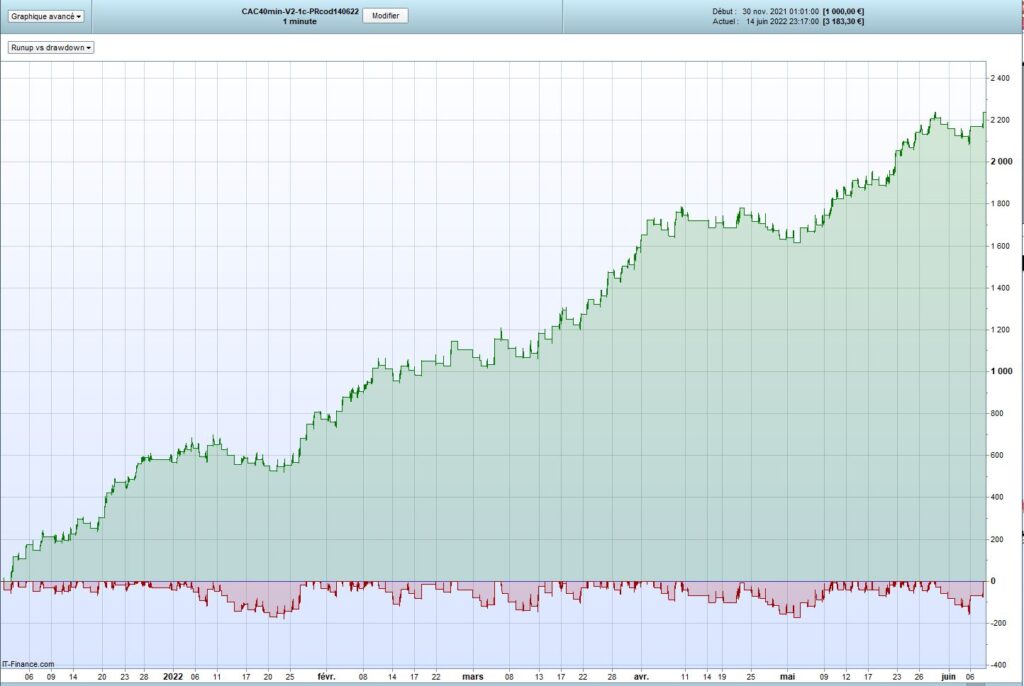 More details on the results : 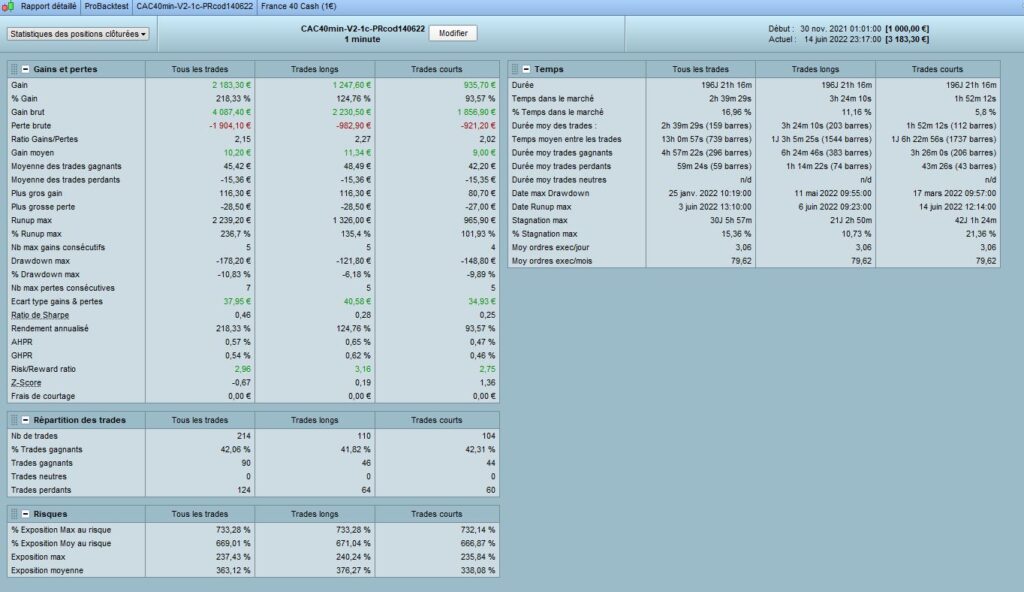 How to make the system scalable and how to take less risk:

The trading robot will take 1 contract per position by default.

You can choose 2, 3, …X contracts depending on your capital. Just copy the code of the trading system to modify the quantity of contracts purchased.

Change the code to buy 2 contracts and authorize too your robot to buy 2 max positions. 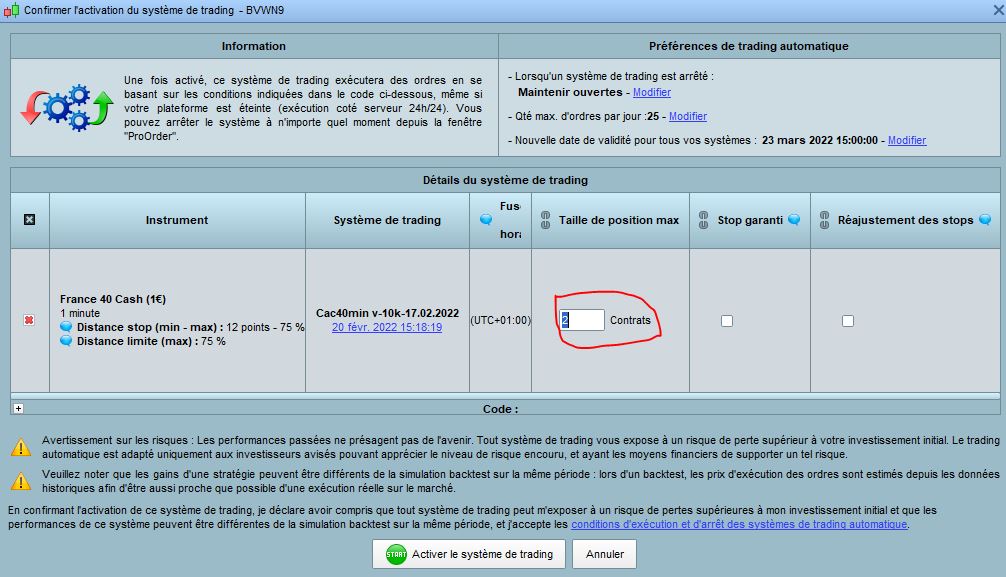 Now your capital is growing and you want to scale your gain.

Obviously you need the capital to follow, because the “volatility” of the trade will obviously be proportional.

Here are some examples depending on the number of contracts used with an average spread of 1.0: 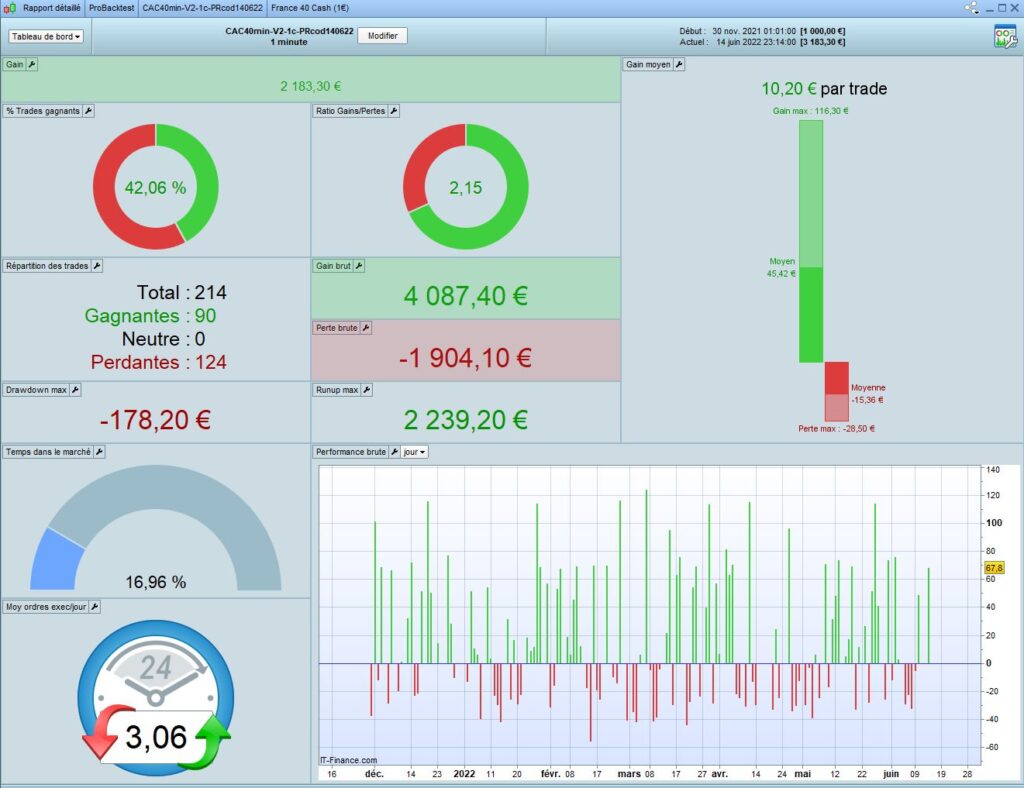 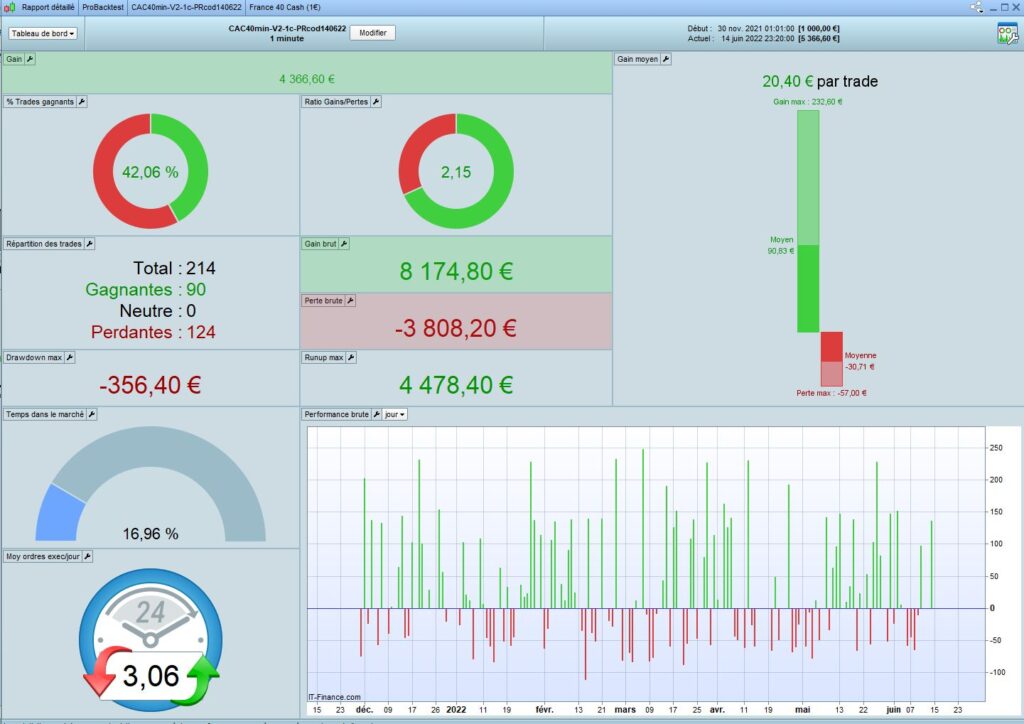 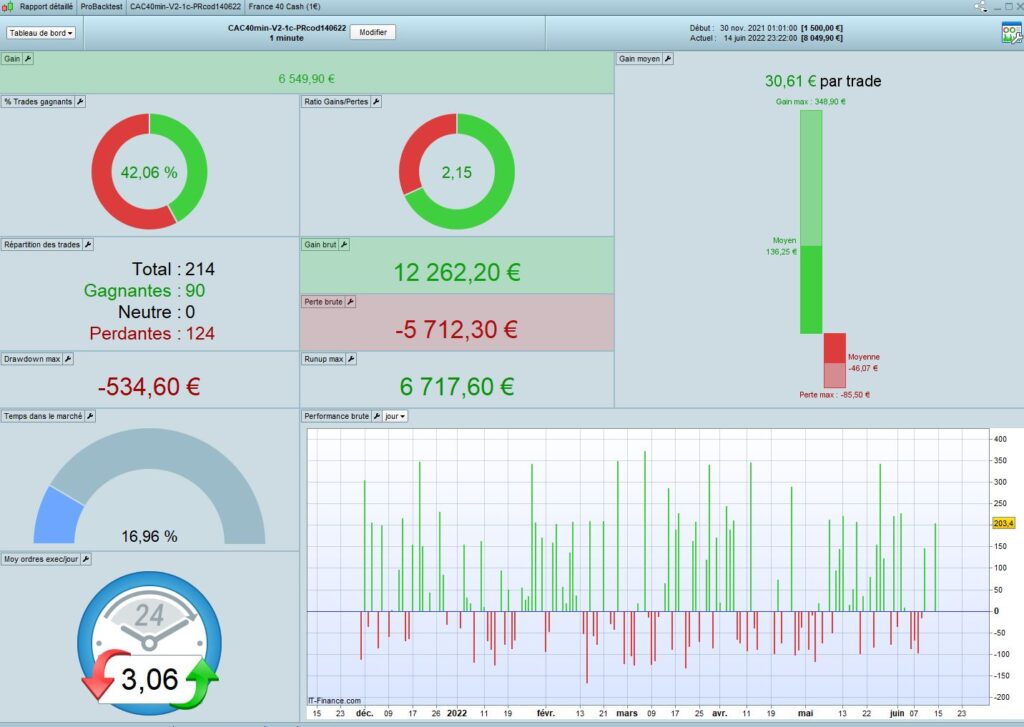 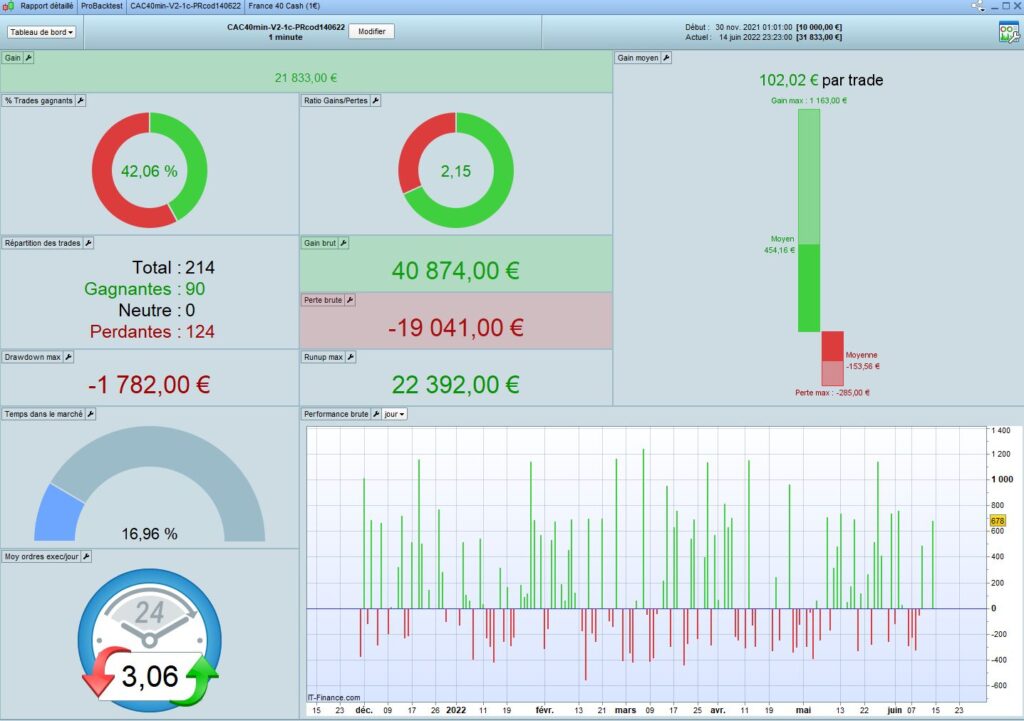 Once you have reached your expected capital gain, do not increase the position size anymore and only increase your capital, so that your risk will decrease further.

By subscribing to the license of less than 30.00 per month you have access to all robots developed by our company and to all updates of each robot.

The robot is adjusted over time according to the past market, because a market does not change overnight. The Cac40 was only worth 7000 points 10 years ago. So it’s all about proportionality.

Configuration of prorealtime for the robot:

You need to set up your robot on the CAC40 index market in minutes.

Choose the trading system corresponding to the number of contracts you want (or adapt it yourself).

Choose your market according to your capital 1, 2 or 10€ the point

1 contract for 1000 euros of initial capital

Then 500 euros of capital per additional contract

If you want to take more risks, it is your choice. But be careful to control the drawdown that does not exceed your capital and especially that it is not too close (minimum ratio recommended 2x the drawdown)

The risk is there.

We are continuously working on other versions, because I am convinced that the gains are not made only thanks to a bot but a set of bot that cover the market. Some won’t win for a period of time while other bot will. I’m trying to find a complementarity.

if needed I can make a discord or 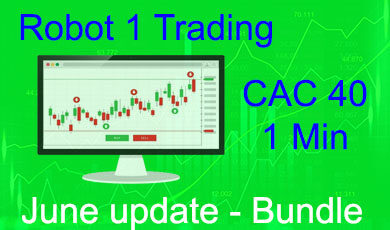 Robot 1. Through this minute scalping you will get impressive results.